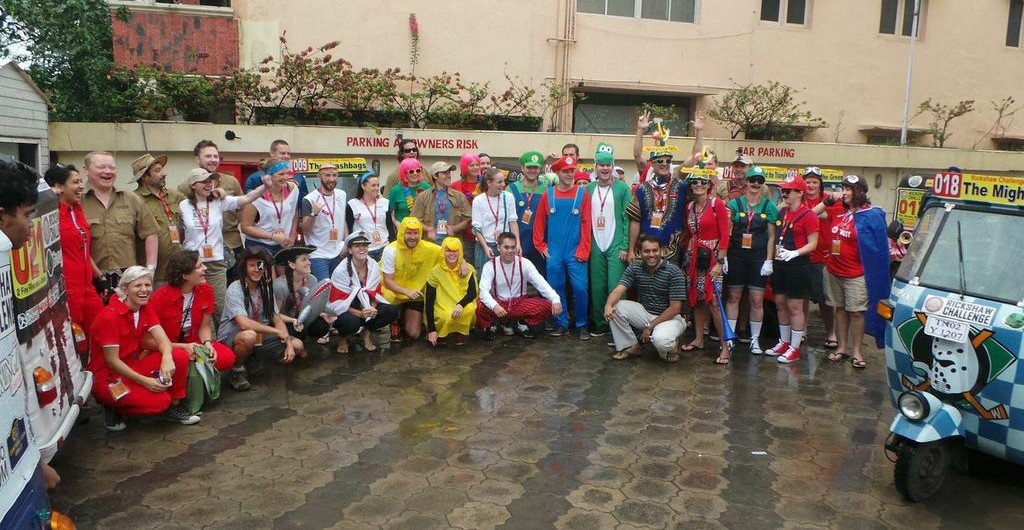 Kicking off on the 29 December 2014, 21 teams made up of 48 participants from 14 different nationalities began their journey in Chennai and revved down the Coromandel Coast in South India to Trivandrum in auto rickshaws.

With the tail end of a cyclone to battle in the first few days, the teams didn’t get the easiest start on their journey along the coast to Pondicherry, but with some spectacular costumes and a whole load of enthusiasm – everyone kept their spirits and and got to know their trusty three-wheeled steeds on the first leg of their journey.

From Pondicherry to Thanjavur the terrible Indian country roads linking up small villages between ancient temple towns made the Rickshaw Challenge live up to its name. Many teams got lost on the way and had to get rescued by Princely, the trip manager, and we actually had over 20 breakdowns on the way to Thanjavur.

Before the teams could kick back and bring in the New Year in Madurai, and welcome in the 9th year of the Rickshaw Challenge, they had to tackle the road ahead, which was not without its own drama. One of the teams, Dukes of the Green, who became infamous on the Rickshaw Challenge Classic Run 2015 for their crazy antics.

The participants of the Classic Run 2015 saw in the New Year in Madurai, where everyone got the chance to drink in heavy rain after tail end of a cyclone which came back to haunt everyone after leaving Pondicherry. However, most of the Challengers made it to the famous, brightly coloured Meenakshi Amman Temple the day after, even though most people partied late into the night!

Once everyone recovered from the toughest days of the Classic Run and the New Year’s festivities, it was time to go down to Tuticorin, but not before a visit to one of the local schools built by our charity partners Round Table India. The children were quite scared by one of the Australians who was dressed as a kangaroo, but still had a lot of fun and enjoyed the donations of pens and toys provided by the teams before they continued their journey.

Most of the remaining journey was relatively drama free on the roads. Our teams battled kleptomaniac monkeys and Ghat roads on the way the most southern tip of mainland India to catch the sunset. The last day on the road was relatively uneventful, where even the Dukes of the Green didn’t have an accident. Everyone made it to Trivandrum in once piece and in time for the awards ceremony.

Team Shawmacher won the Ultimate Rickshaw Challenge Classic Run 2015 World Champion title. Team Rice to the Challenge got a special award for the money they raised for charity, and Team Dukes of the Green got the Bonkers Award for being one of the craziest teams that the Rickshaw Challenge has ever seen!

After 950 km in autorickshaws designed to only go short distances at maximum speeds of 60 km per hour – and that’s down a hill with a full load – everyone made it from Chennai to Trivandrum in 9 days.

Are you crazy enough to come along for the ride? Then join us on the next Rickshaw Challenge. Then get a team together and lets see you at the starting line! If you want to join us in spirit, like us on Facebook or follow us on Twitter or Instagram to keep up with our latest antics.
Tags: autorickshaw Chennai classic run classic run 2015 India kerala Pondicherry rickshaw challenge Tamil Nadu temples
Next postThe Travel Scientists Presents the First Baltic Run!