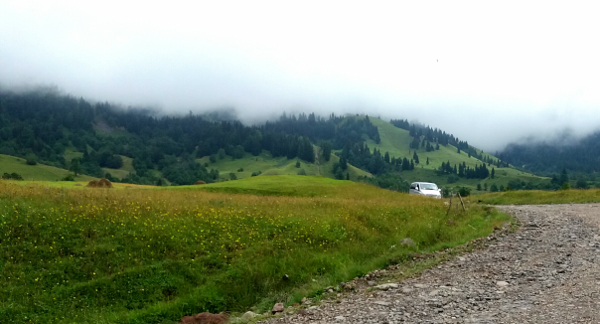 Five teams with participants from Belgium, Hungary, UK, India and Germany – old Travel Scientists veterans and new recruits – will explore Turkey, Georgia and Armenia for 11 days in 2WD or 4wD drives during the Caucasian Challenge 2016.  The senior of this year’s rally is a more than 20 year old Subaru Justy, which will now undergo its most difficult test and experience its greatest adventure!

Day 1, Istanbul to Sinop – Turkey is not Switzerland

After meeting in Istanbul, the always lively capital of the Bosphorus, the teams had two days to cross the length of Turkey.  Roads were still easy, the drive relaxed. Except for team Wiredmango , who, in an attempt to explore the undiscovered, got off the road and ended up having the choice doing a stunt jumping across a river without brigde (thanks to a mudslide) or to turn around and go all the way back. In the end, the team bailed out from the stunt and arrived late for the welcome party at them camping site at the Black Sea Coast in Sinop. Luckily they were the ones carrying all the party supplies, so the party could not start without them. Once arrived neither the late hour nor the rain could stop our teams from getting to know each other over a glass of wine and talk about the day’s adventures and the ones to come.

Lesson of day the day: “If we were in Switzerland, they would have put a sign.” Well guys, things work a little bit differently in the Caucasus!

Day 2, Sinop to Batumi – Patience is a Virtue

The next day we promised our teams a long ride and an even longer wait at the Turkish-Georgian border. Promises need to be kept and most teams spent a bigger part of the night waiting in line. No better opportunity to make friends with Turkish bus drivers, Slovak members of the peace corps, having a drink with your fellow teams and see how long you can survive without a proper toilet.

Team Llanfair Railways, with British timeliness, crossed before midnight, while the last teams, Team Wiredmango and Team Deepzone  crossed around 6 am and fell dead tired in their hotel beds in Batumi.

Lesson of day the day: At the Turkish-Georgian border hand sanitiser is your best friend and should be applied generously on your legs after visiting the “toilet”.

Day 3, Batumi to Kutaisi – Kudos to the Marketing of Mars Inc.

The organizer Team Wiredmango decided to take on the Caucasian mountains straight away, while the others opted for a few hours of rest. This day’s route led the teams deep into the mountains of Georgia, offering breath taking views and breakneck mountain roads.

After the exertions of last night, all teams opted for the “easy” choice, the 2WD route, instead of the 4WD. But “easy roads” doesn’t necessarily mean the same in Georgia like back home, so our teams’ driving skills  and their car’s endurance were equally tested. The reward was an insight deep in the rural Georgia, on roads that have never seen a foreigner before (except maybe during the last Caucasian Challenge), amazing views over rivers, steep valleys, forested mountains and meadows and some nausea for the ones with a sensible stomach or a fear of heights.

At the top of Goderzi Pass our teams had the possibility to do some shopping in the only supermarket/fast food shop for miles. The shop owner’s, a lovely older lady, recommendation of the day were some snickers bars – a true local specialty which she recommends every year.

The day’s final destination was Kutaisi, Georgia’s second largest city, a lovely town, divided by the Roni River and full of old style Georgian houses. Those arriving early could enjoy their first Georgian meal and wine, since we are in foodie heaven, every dieter’s hell and the birth-country of wine now!

All teams made it safely to the hotel, with Team Llynfair Railway once again showing off their British precision and punctuality. Team Wonderlust King arrived only far after midnight, but even with their Subaru they mastered the day’s challenges in the end!

Lesson of the day: Sleep is overrated.

Now our teams are on the way to Mestia, probably one of the most beautiful spots in Georgia. Stay tuned for their next adventures!

Are you crazy enough to come along for the ride? Then join us on one of our next adventures. Get a team together and let’s see you at the starting line! If you want to join us in spirit, like us on Facebook or follow us on Twitter and Instagram to keep up with our latest antics.
Tags: Caucasian Challenge caucasus georgia istanbul rally road trip travel Turkey
Previous postWhy you should sign up for the Caucasian Challenge
Next postThe Caucasian Challenge 2016, Day 4 – Cows, Defense Towers and the Local Fire Water