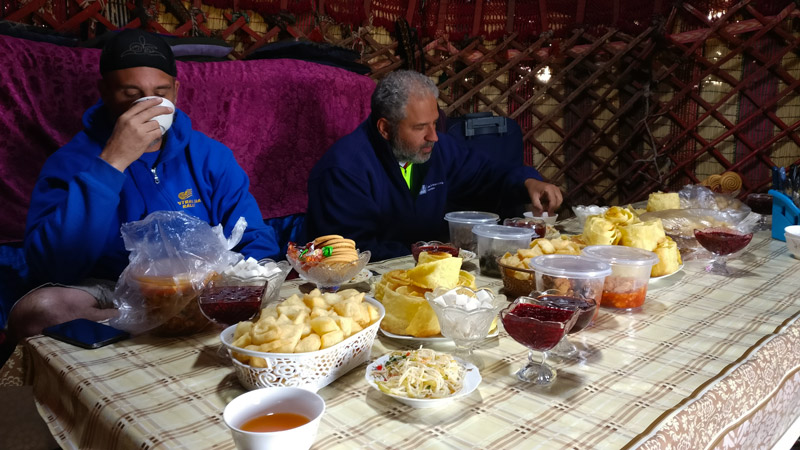 We at the Travel Scientists are not just always seeking the next adventure, but we are also always on the look out for our next meal. But even though sometimes we might be forced to cook ramen over a gas burner for lunch, we do love to try the local cuisines of the places we travel to.

When you don’t speak a country’s language or can’t even read its letters, just randomly pointing on the menu is often the best way to also get your culinary adventure going. But to give you at least some direction, we’ve compiled a list of the must-eat-dishes for every country rallies visit.

We’ll start of with one of cour favorites, the Central Asia Rally!

Disclaimer: Many of these dishes are found all over Central Asia and beyond. Here you can just read our humble personal opinion, in which country you’ll get the best version of each.

This sour soup is popular all over Eastern Europe and Russia. It is based on beet-sour, which gives the soup its typical sour and sweet taste.

Each region, each village and basically each family has their own secret recipe, handed down over generations. It is basically impossible to get borscht with the same taste in two different places. The versions differ in the soup stock, type of meat and the vegetables used. So ideally you make this soup your go-to starter for every meal, to get just a small idea of its diversity.

Another soup which is widely popular all over Eastern Europe, Central Asia, Persia and even as far as India. The Kazakh version is usually made from lamb-broth with lots of fatty lamb meat. A huge amount of herbs like cillantro, parsely and dill as well as plenty of vegetables like carrots, potatoes and onions make the soup tasty and filling. Some versions even contain fruits like apples or dried apricots.

Again every region and every village has their own version of this delicious soup, so the culinary exploration never ends!

Contrary to its Indian counterpart samosa, the Uzbek samsa is usually baked and not fried. You most often find them filled with lamb meat and onions, but there are also versions with other kinds of meat or vegetarian variants.

Stop for a quick and cheap snack at one of the many “street-bakeries” (you’ll recognise them easily thanks to their huge outdoor clay oven) or try one on Bukhara’s main sqare. Or ideally just eat them every chance you get!

Now, to be honest with you, by the end of the Central Asia Rally you probably won’t want to see any rice and any plov anymore, because this is THE staple dish all over Central Asia and Tajikistan’s national dish. Rice is fried together with carrots or yellow turnips – giving the dish its characteristis yellow color – and cubed meat over an open flame.

Traditionally plov is eaten with the hands from one one larege bowl in the center of the table, but as a foreigner you’ll most likely get your own plate and even some cuttlery.

When you really can’t do any more rice,  you’ll have the chance to switch to noodles all over Central Asia for a while. These pulled noodles with vegetables and meat with a savoury sauce are of Chinese origin and the national dish of Kyrgyzistan’s Uyghur and Dungang minorities

We’ve found the best laghman in Kyrgzzstan, but are happy to be corrected. Please include precise coordinates, so we can try it ourselves the next time!

If we’ve whetted your appetite for the cuisine of Central Asia, there is still some time to apply for the Central Asia Rally in June 2021 – you can find more info here.  And if you like it spicy, stay tuned for the second part of our culinary guide with some of the best dishes South India has to offer!

Are you crazy enough to come along for the ride? Then join us on one of our next adventures. Get a team together and let’s see you at the starting line! If you want to join us in spirit, like us on Facebook or follow us on Twitter and Instagram to keep up with our latest antics.
Previous postHighlights of the Rickshaw Challenge Classic Run 2020
Next postCulinary Rally Guide Part 2 – Rickshaw Challenge & India’s Cup