The Caucasian Challenge 2016, Day 9&10 – Forbidden Territories And a New Friend From the Local KGB

The Caucasian Challenge 2016, Day 9&10 – Forbidden Territories And a New Friend From the Local KGB 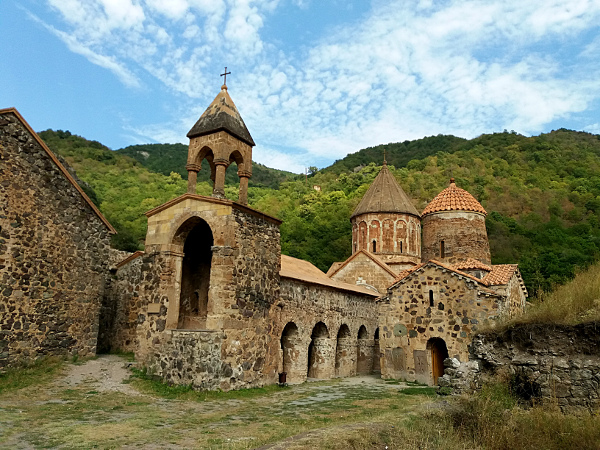 Day 9 led our teams of the Caucasian Challenge 2016 into Nagorno-Karabah, a disputed territory, which is officially part of Azerbaijan, but basically independent with its own government and supported by Armenia.

There is kind of a border check point, but the officers usually more busy with enjoying life (and a drink) than with bothering innocent tourists. After a couple of cars with foreign license plates and our Caucasian Challenge 2016 stickers had passed through, they remembered their job and stopped Team Deepzone – but probably more out of curiosity than sense of duty, since soon they were waved through, with some good wished on their way.

The winding mountain roads of Nagorno-Karabakh had a unpleasant surprise for our teams: what has been a gravel road just a few years ago, is now a brand new asphalt road almost all the way through. But on the other side, like this, our teams had plenty of time to visit the 9th century monastery Dadivank and to relax at the hotel’s swimming pool in Vank.

Oh, and how we would love to tell you about the next day’s special adventure, but we’ve promised our new friend of the local KGB to keep the secret. And since we want to offer next year’s teams the same opportunities, we need to keep this promise. Just that much: it involved a forbidden area, a military checkpoint and a lot of negotiation skills.

What we can tell you, is that our trip led us deep into the no man’s land between Karabakh and Azerbaijan, heavily scarred by war and destruction. Till today the region is frequently a location of armed conflicts between both militaries. Driving through the mostly uninhabited ghost towns made our teams feel a bit like they had survived a zombie apocalypse and acting unsuspiciously passing by the because of a recent breach of the ceasefire increased military units made them feel like secret agents on an important mission. Jokes about Azeri long distance missiles were frequent, till, opening the door, something dropped with a loud bang and everybody panicked for a short second.

After waving Iran across the river Araxes, the long and exciting day ended with a birthday party for a member of Team Care Bears, with the special appearance of a vodka-infused water melon (Category: Things you do with medical tools when you are a doctor on an adventure trip…).